I was showing someone my blog the other day and they asked when my last post was. I confidently said, “About a month or so ago..” and then I saw it…

Where did all those months go? Maybe I blacked out out or something…

In order to ease into my “blogging resurgence”, I thought I would start with a quick one regarding how I use VSTS and an interesting issue I encountered last night. Since this problem owes me a few hours, I hope it shortcuts somebody else’s pain.

I love how VSTS gives teams the flexibility to work in whatever way they like but a framework still exists to put some guard rails in place. More important than governance though is the ability to share proven DevOps patterns so team members can focus on the unique aspects of the solution rather than common activities like deployment.

IMPORTANT!!! If you try to use a variable name for the Azure Subscription with a hyphen in it like $(Subscription-Name), VSTS will attempt to verify the subscription and report a validation error. This will prevent you from saving the task group.

This took me a couple of hours to realise so as a result I was pretty motivated to share this for the common good of all. I removed the hyphen and the world was fair again. Save the task group and return to the release pipeline.

The subscription is the only one we can’t use a variable for, so go ahead and manually select the desired Azure subscription. 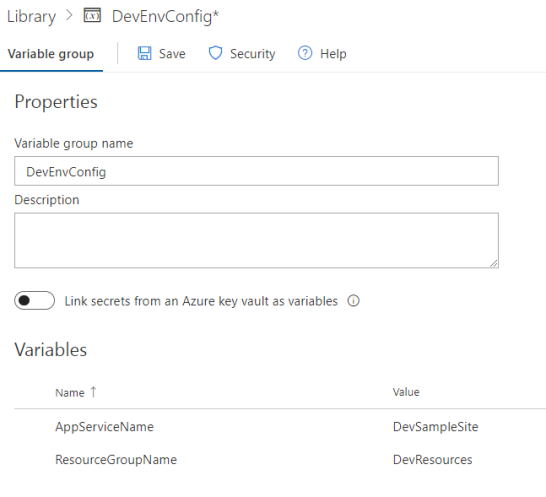 That’s it. We now have a DTAP pipeline where all of the environments are deploying to App Services on Azure. We are also using blue/green deployments that allows us to perform a quick performance test before we activate the new site.

We have a task group with our “recommended” way to perform web deployments which anyone in the organisation can use, regardless of the VSTS project. They can either manually specify the required parameters or as shown above, create a variable group for each environment with its specific properties. The next time a member of the team needs to add a new environment, they will simply clone it or add the task group, create the variable group and link it.